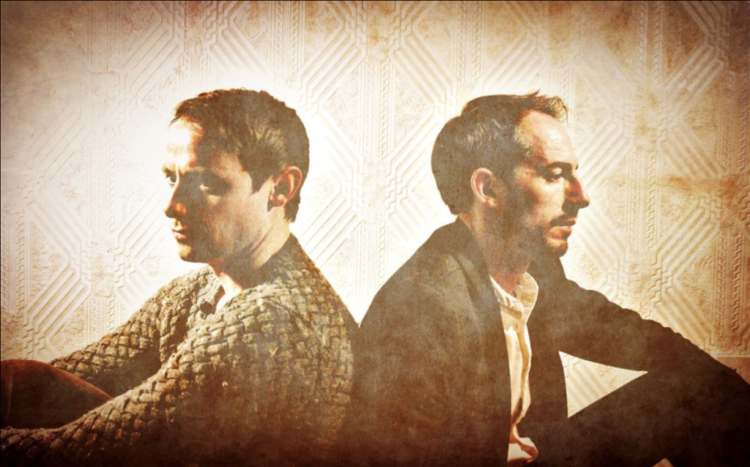 The artist’s debut Single ‘The Draw’ is out now

Sleeveens is a band from Ireland which recently released their debut single called “The Draw”. Their imagery and sound have a great cinematic feeling and it was a pleasure to dive more into their inspiration and influences.

HELLO GUYS, TELL US MORE ABOUT YOUR DEBUT SINGLE ‘THE DRAW’ AND YOUR STORY SO FAR.

SLEEVEENS is Gareth McCarthy (instruments and voice) and Craig Cahill (voice and words).We have written, performed and worked together for over 20 years in a number of different musical groups (e.g. Red Empire, Resolution End and others). We have graced many of Ireland’s largest stages over the years (e.g. The Olympia, Vicar St, Cork Opera House, The INEC) as well as touring abroad. And we have both appeared and performed live on Irish television and radio many times (RTÉ’s The Saturday Night Show, The Late Late Show, Two Tube, The John Murray Show, TG4’s Róisín and many more). But SLEEVEENS is the first time they will be releasing our compositions exclusively.

The Draw is a love song about the magnetism between flawed individuals and the perceived certainty that we can find in each other. It’s about reaching a point in your life where you trust your judgement enough to know with certainty when you feel yourself drawn to someone and why, and when those reasons are based on fully recognising the other person for all of their flaws and qualities.

WHAT ARTISTS AND MUSIC GENRES INSPIRED YOUR PROJECT THE MOST?

Sleevens is a chance for us to express “difficult” songs, and what I mean by that is; we have written lots of songs that are very open, honest, intimate and vulnerable and rather than let songs like that be hidden in the background behind more palatable songs we have decided to exhibit them front and centre.

YOUR MUSIC SEEMS TO HAVE SOME CINEMATIC VIBES, ALSO SUGGESTED BY YOU MUSIC VIDEO, WHAT MOVIES WOULD YOU LOVE YOUR MUSIC TO BE FEATURED?

The video for The Draw, features footage from the film “She Shoulda Said No!”, featuring Lila Leeds. The tragic story of the demise of Lila Leeds’s film career and her participation in the making of this exploitation film touches heavily on themes within the song about being pulled towards reckoning with uncomfortable truths that upset our world view. And in the current cultural landscape where attitudes towards gender, representation and identity are in flux it is important to remember examples of tragic discrimination like that of Lila Leeds.

But more broadly, we’d love to see our music being used appropriately in a dramatic scene. That would be a great moment. Hopefully, it happens one day!

HOW’S WORKING AS A DUO AND MANAGING DIFFERENT INSTRUMENTS IN YOUR OWN PRODUCTION?

I have a great relationship with my co-writer Gareth and we seem to always be on the same level when we think about songs, which I suppose after 20 years of working together, is a lovely thing. Gar usually plays all of the instruments, unless we’re working with an orchestra, like on The Draw.

We also worked very closely with our co-producer/mixer/engineer Steve Flynn on The Draw. Steve is extremely meticulous about his process and how he goes about recording. Everything is very well-thought-out and nothing but the very best (as far as takes are concerned) is accepted. We’ve also known Steve for over 20 years which again is very helpful and a very lovely thing to be able to say.

HOW IT WAS FOR YOU TO PUT OUT YOUR FIRST RELEASE DURING THIS PARTICULAR MOMENT IN HISTORY?

It has been odd but rewarding. We’re really proud of the song and although we have had some issues with getting it out to a wide audience because of various factors including the pandemic we have felt really heartened by the genuine warmth and sincerity that people have shown in communicating to us that they feel it is a great song.

There has been numerous times when a person has stopped me and rather matter-of-factly stated “That’s the best thing you’ve ever done” which is quite a shock to hear but it’s also really cool.

HOW DO YOU FIND THE MUSIC SCENE IN IRELAND AND WHAT ARE YOUR FAVORITE IRISH ARTISTS?

There’s lots of different ways of looking at that question, so firstly I’m going to look at it positively. There are a ton of great artists on the Irish scene; Fontaines DC, Lankum, CMAT, Villagers…it’s a long list and it’s very inspiring.

But secondly, the cream does not always rise unfortunately and there are plenty of examples of great artists who for one reason or another just didn’t get the plaudits that their work merited. Essentially, it’s not a meritocracy and that’s sad but that’s life. You just have to enjoy those artists as much as you can and try to share your love of them and their work in order to make the work live on.

As The Draw is our debut single you may have guessed that we have a ton of other songs that we would like to finish and release. Unfortunately in Ireland the vaccine rollout has been quite slow so we have to be patient but as soon as I can get back into a room full of musicians and start playing/singing/recording/writing I will be there quicker than you can say “Session!”

Thank you for taking the time to be passionate and inquisitive about our music. My wish for people listening to our song is that they stop, listen and allow themselves to feel. In my opinion, that’s becoming more and more of a rare thing unfortunately.