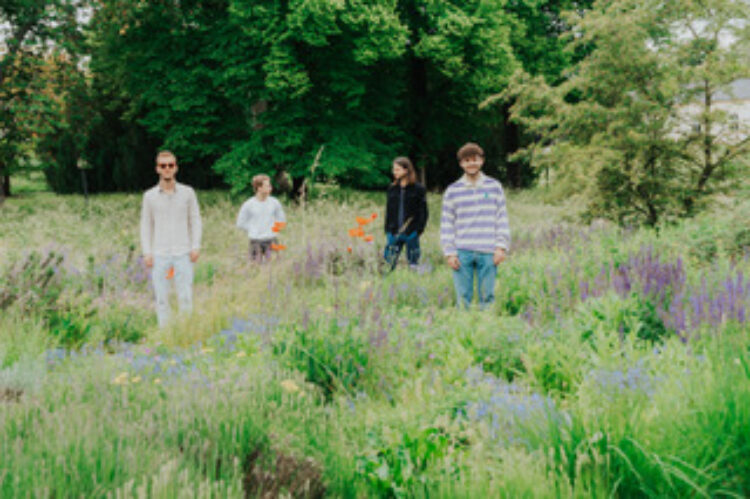 The artist’s new single ‘Pepita’ is out now

Sacropolis is a French and German quartet that just released an indie-pop banger called “Pepita”. This is their last single before their debut EP “Something like Pepita” coming out in August. It was a pleasure to dive more into their influences and background.

HELLO GUYS, YOU HAVE A FRESH SONG CALLED ‘PEPITA’. TELL US MORE ABOUT THIS NEW SINGLE AND YOUR STORY SO FAR

Hi guys, thanks for having us 🙂 That’s 100% correct, we have just released a brand new song called ‘Pepita’. It’s a catchy Indie-Pop tune that radiates plenty of good vibes and a summery lightness, that everyone of us is longing for at the very moment right? Lyrically ‘Pepita’ reflects a coming of age story, somewhere between youthfulness and adulthood: it describes the feeling of being hopelessly in love for the first time, which goes along with a certain helplessness and speechlessness. On a musical level two anthemic guitars provide a danceable facet in interaction with a groovy bass line. The vocal melody reaches its zenith in the chorus and makes you sing along at the top of your lungs.

‘Pepita’ is our fifth single so far, and also the last one before the release of our debut EP called ‘Something Like Pepita’. This will be the first complete work released for our band, even though we have known each other for so many years. To be precise, we met in Frankfurt, Germany, while in school, it must have been around 2013. Since then, we became best friends with the same passion in life: music. At first, we rehearsed covers in our parents’ basement, but very soon we had to get out of those comfort zones and start playing our own songs in front of people. Right now, we are so tremendously happy to release our music and share it with you. It is a very inspiring time for musicians right now.

’PEPITA’ IS THE LAST SINGLE BEFORE YOUR DEBUT EP ‘SOMETHING LIKE PEPITA’. HOW WAS THE WRITING AND PRODUCTION PROCESS FOR THIS EP, AND WHAT ARE YOU EXPECTATIONS WITH THIS DEBUT RELEASE?

Yes, ‘Pepita’ is the fifth and final single before the release of our debut EP ‘Something Like Pepita’ (August 27th 2021). This whole journey was an enriching and fun experience. We started to write songs a few years ago without major ambitions of releasing a record one day. However, we then developed the desire to record and release an EP. In Summer 2019, we built a home-studio in an old barn in Southern France and spent one of the best summers of our lives. You have to know that some of the band members are half-German and half-French. Although we all live in Germany at the moment, there is a very strong connection towards France, where we have big moments as a band and also wrote most of our music.

Back to the EP: well, it is always difficult to talk about expectations, especially when you’re unable to support your release with a proper release party and release tour. What we hope for is to sweeten up this summer for the people that come across our music.

WHAT ARE THE MUSIC ARTISTS AND GENRES THAT INSPIRED YOUR SOUND THE MOST FOR THIS PROJECT?

When we initially started playing our instruments, each and every one of us was inspired by the Red Hot Chili Peppers, while learning in our bedrooms. That was a huge coincidence and until today, our common love for the RHCP remains strong. You cannot imagine how happy we are that John Frusciante rejoined the band. As we grew up, other very inspiring artists to us were Kings of Leon, The Strokes and Foo Fighters. As you can see, we were heavily interested in Rock acts. With the music development in the 2020’s, our music taste and especially the musical genre of the music that we want to make have evolved. Indie-Pop has become the genre that influences us the most.

YOUR MUSIC HAS BEEN SUPPORTED AND FEATURED ON MANY SPOTIFY PLAYLISTS. CONGRATULATIONS ON THAT!! WHAT DO YOU THINK ABOUT THE SUPPORT SPOTIFY GIVES TO NEW ARTISTS AND WHAT ARE THE WAYS YOU USUALLY DISCOVER YOUR FAVORITE NEW TUNES?

Thanks a lot, guys! That’s an interesting question. We would consider Spotify and its repercussions on the music industry as a curse and a blessing at the same time. Let’s start with the positive: obviously, it is amazing to be able to upload music independently on Spotify, without needing a major record deal or anything else, and hence, spreading your music to a potentially huge amount of daily music listeners. This advantage is unseen in music history and probably makes Spotify (and other streaming services) irreplaceable nowadays. Also, thanks to heavily followed playlists (whether they be editorial or algorithmic), newcomer bands like us have the opportunity to have their music listeners by people that could not reach that easily any other way. By the way, thanks to the individually established playlist “Release Radar”, we discover amazing new artists every week. However, on the other hand, there are voices that accuse Spotify of not fairly remunerating artists, which is probably true. In our case, however, this is, for the moment, not the reason why we make music and therefore, not a problem right now.

WHAT ARE THE ORIGINS OF YOUR BAND NAME ‘SACROPOLIS’?

Well, let’s say that we created that name while at a party in France, and as you can probably imagine, a little drunk. The next morning, we woke up and thought that it did not sound that bad and was something special. We decided to adopt that name and felt great with it, without really knowing the meaning behind it. Indeed, no one of us speak Ancient Greek and we did not notice until a journalist dropped the bomb and revealed that Sacropolis stands for “Holy City”. We were even more happy, because we think the reference to the city is pretty beautiful. Again, a holy coincidence 🙂

WHAT DO YOU THINK ABOUT THE INDIE MUSIC SCENE IN GERMANY, ESPECIALLY FRANKFURT, AND HOW DOES YOUR BAND FIT IN THIS?

The German Indie music scene is very vibrant. There are countless inspiring bands that sing in English such as Giant Rooks, Rikas and Leoniden. But also, there is a real return to the German language, incarnated by acts such as Jeremias, Bruckner and Betterov.