Man On An Island

Interview with Man On An Island 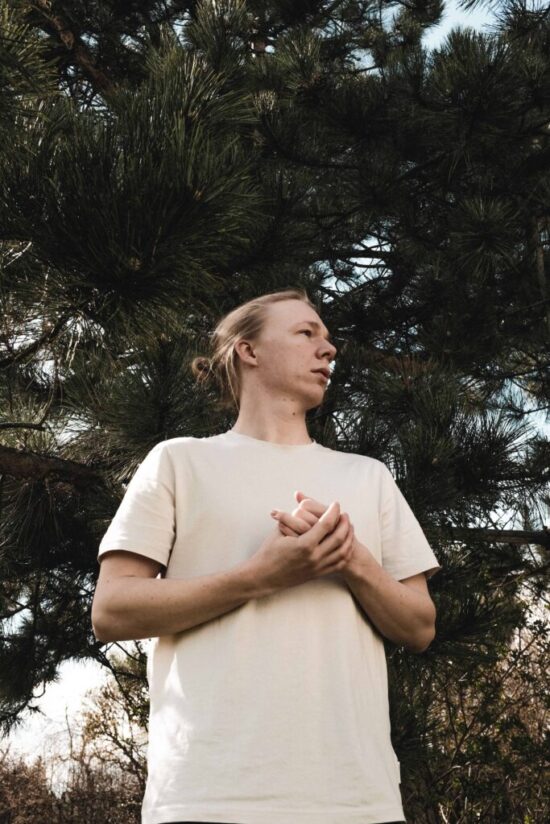 The artist’s new single ‘Hold On’ is out now

Man On An Island is a new folk artist based in Germany, it was really interesting knowing him better and talk about his home recording process, musical inspiration, and his latest single “Hold On”.

You just released a new single called “Hold On”, could you tell us more about the single and your story up until now?

The song accompanied me for quite some time now and has a very personal meaning to it. I wrote it about two years ago in spring when a related human passed away and put so many people around me in deep grief. So I searched for something to ‘hold on’ and for the positive things in life that should keep us going forward even in the darkest hours. So basically I wanted to face depressing happenings like death with hope and tried to write a hopeful song that handles these sad emotions.
My musical journey started back in my childhood when I decided to buy a cheap classical guitar while we were on holiday in Austria. From there on I took lessons to learn classical guitar, I must have been about 6 or 7 at that point. That’s about it for the starting point. Took me several band involvements to find out that I enjoy making music the most when I’m on my own. I’m currently studying to become a teacher and enjoy making music in the free hours I have. Sometimes a song evolves within these hours and that’s also how ‘Hold On’ & ‘Lavender Skies’ came to life. Both of them were recorded in my living room, which is just my favourite place to record some music.

What’s the meaning behind your moniker “Man On An Island”?

There’s not really a meaning to it. I’m mostly a quite reserved person so maybe that’s where that name came from. Just being somewhere out there on my own island.

You mainly produce your songs in your living room. What’s the artistic difference you caught between home production sessions and recording in a professional studio?

To be fair I never recorded in a real studio setup before. Always thought it would be better to just try to work out things on my own. I can definitely tell you some disadvantages of recording in my living room. First one would be that there’s a tram station right at the front of the house I’m living in, which causes enormous noise when I’m trying to record something through a microphone. Because of that tram I’m mostly recording at night and that worked out fine for the last songs. A huge advantage when I’m recording on my own is that there isn’t any pressure resting on me. No time limits and no waste of money if I’m not hundred percent happy with the last recording session. Even though I’m recording it all on my own I try to get things as professional-sounding as possible. That’s a huge time-killer as things never really feel finished to me. I’m always ending up with the hundreth take of an acoustic guitar, even if it’s just a tiny detail thing that you won’t even hear in the fully finished version of the song. So to me recording and mixing at home has some positive and some negative aspects to it, but overall I’m very happy with how most songs work out.

Lyrics seem to be really important in your musical composition. At what point in your songwriting do you decide to write the lyric part of a song?

Most of the time I sit around with my guitar having the melody ready and waiting for some words to pop-up in my mind. Speaking of myself, the process of writing a song takes a long period of time. Can’t remember the last song that only took me a day or two to finish. I’m often writing a verse and then let that verse rest for a week or several weeks. If I come back to the snippet and a second verse or a chorus comes to my mind then it slowly transforms into a new song. I only do a recording of a song when I have already finished all the lyrical work on it.

You will put out an EP later this year, what are the main inspirations, musically and not, behind this release?

A thing that always inspires me to write a song is nature. Think there’s always a certain bond to nature within my songs as I’m trying to process everyday life when I’m out taking a walk. When I looked at all the lyrics of the songs I realized that I wrote most of the songs on the EP at dawn or generally in the setting of evenings. That led to the title “Evenings EP”. Musically I’ve been a fan of Nick Drake’s songs for a long time. He’s just amazing at putting a certain mood to a song, even if that mood is sadness most of the time. There’s so much amazing music out there that I better don’t even start to list all those musicians that inspired me.

How’s the folk scene in Germany and what are your favourite local acts?

Afraid I can’t tell you that much about the folk scene in Germany, as it’s just somewhat standing still in the current situation. We’ve got loads of German songwriters that seem to pop-up on every corner. But to be honest that’s not really the music I enjoy listening to personally. A favourite local act of mine would be a guy called ‘Daniel O’Rhys’. I don’t even know if he’s from around here but I love the ambient piano tracks he’s creating.

There are quite a few songs I will release over the year. Next one will be out in about two months or so.
I’m also currently trying to figure out how to record a decent live session. So there will be some video stuff coming out as well.

Hope that I will get the time to record new stuff soon as I’m very much excited about creating some new songs and soundscapes. Just waiting for the moment of inspiration to kick in.