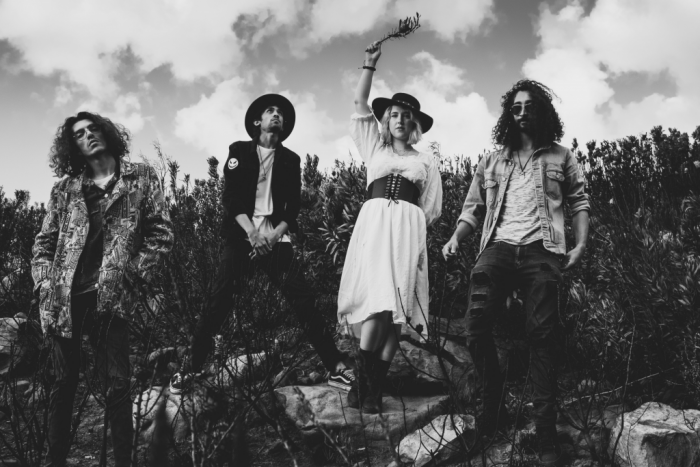 Lost//Youth is a band from South Africa that recently released a new single called Sinner. It was really nice to talk with them about their past releases and future plans.

HELLO GUYS, YOU RECENTLY RELEASED A SINGLE CALLED “SINNER”. TELL US MORE ABOUT THIS SINGLE AND YOUR STORY UP UNTIL NOW.

We all grew up in different parts of Cape Town, South Africa, with the dream of playing music around the world. It’s funny, we realized recently that our paths almost crossed so many times but we all officially met at a jam session in a little coffee shop. When we played together it was obvious that we had found something special. The that way we predict each other on stage and while we jam, is pretty hard to find.

WHAT ARE THE ARTISTS THAT INSPIRED THIS SONG IN PARTICULAR?

We don’t usually refer to other artists or songs when creating, it’s more about capturing the feeling of the song, than trying to emulate something specific.

Alanna: As a songwriter, the only thing on my mind when writing is to express a feeling or concept in a meaningful way. Genre is something that finds us afterwards I think, we never really go looking for it.

EVERY ONE OF YOUR SINGLES “SINNER”, “MAYHEM” AND “TOO LATE” HAVE ALL A DISTINCTIVE SOUND. WHICH DIRECTION ARE YOU TAKING FOR YOUR NEXT SINGLE?

We don’t wanna give away too much, but it’s going to be something familiar for our fans. It’s definitely heavier than Sinner and it’s one of our favorites to play live 😉

HOW DO YOU MANAGE THE SONGWRITING PROCESS? HOW DO YOU TURN PERSONAL IDEAS INTO A FULL SONG WITH THE WHOLE BAND?

Alanna: I’m pretty private about my writing process, in terms of lyrics. Most of my lyrics come from 3am insomnia. Sometimes, especially when we first started, I would bring pretty much a finished song, in terms of lyrics and structure, and the band would bring it to life. There’s been times when they hear a song for the first time and just jam along and somehow catch every hit, peak and dip, it’s like they are reading my mind.

Charlie: Now that we understand our style more, we’ve been experimenting with our writing process. Sometimes it starts from a riff, other times the witching hour just hits us in the right way and we have a finished song in 30 minutes.

Faghri: Yeah, each guy adds their own flavour…sometimes songs come out of jams…We’ll be jamming and Alanna will hear something and immediately find the perfect melody line or lyrics to sing over.

WHAT ARE THE ARTISTS OR BANDS THAT YOU’D LIKE TO TOUR THE WORLD WITH?

Many! Our greatest heroes are The Red Hot Chili Peppers, Foo Fighters and Hozier so they are top of the wish list, but artists like Julien Baker, Delta Sleep and Southern Wild would be a dream come true. We love music that moves us, so touring with artists that do that well would be amazing.

WHAT DO YOU THINK ABOUT THE MUSIC SCENE IN SOUTH AFRICA, AND WHAT ARE THE GENRES THAT ARE TRENDING RIGHT NOW?

The live scene is struggling right now… we’ve had some legendary venues close down. But in other ways there are new opportunities. It’s been cool to see how the Amapiano genre has taken off internationally and it just shows the power of social media and streaming platforms. There’s a joke in the scene, that in order to make it in South Africa, you have to leave South Africa. It seems like we take our artists more seriously once Europe or America has given them the stamp of approval, but maybe social media can change this.

Faghri: To record and release as much music as we can and hopefully play some festivals soon.

Alanna: Yeah, we’re finishing up the first EP and getting ready to record the second. It’s a two-part concept project and the second EP is gonna show off our softer, more acoustic sound, which we are excited about.

Faghri: Any good roadies out there? Hit us up 😉