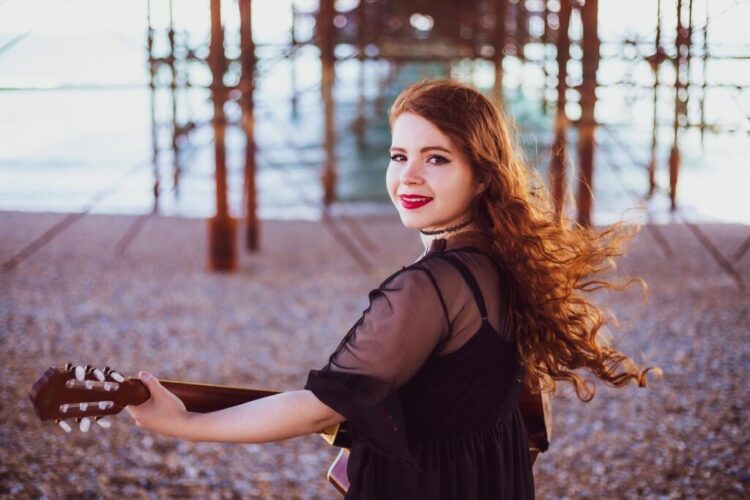 The artist’s new single ‘Momentos Asì’ is out now

Chloe Leigh is a UK-based singer-songwriter who just embraced her Spanish roots on her last single ‘Momentos Asi’. We talked about her experiences in UK festivals, future plans and much more.

HELLO CHLOE, YOU HAVE A NEW SONG CALLED ‘MOMENTOS ASI’, TELL US MORE ABOUT THIS SINGLE.

Momentos Asi is a song that I started writing on a walk home after a long shift at my first bar job in Brighton. I was beyond exhausted after a busy shift, but for some reason the buzz of the nightlife caught my attention. It weirdly reminded me of my mum’s hometown in Spain, and it made me want to look around and take things in for a moment. There was something comforting in finding similarities between the place I had just moved to, and somewhere that was such a big part of my childhood, and this inspired me to write the song in both English and Spanish too. For me the song is Brighton meets Andalusia, and folk meets flamenco.

’MOMENTOS ASI’ IS THE FIRST SPANISH-INSPIRED TRACK OF OTHERS TO COME. WHAT KIND OF RESEARCH DID YOU DO TO WRITE THESE TUNES, WHAT WAS YOUR SONGWRITING APPROACH?

It’s been such an enjoyable process writing these songs. I listened to a lot of Spanish music growing up, thanks to my mum, but it took me a while before I began writing in Spanish. I think it came down to a little bit of uncertainty in the sort of music I had wanted to make, and I was still very much finding my feet in the world of songwriting. But once I started to become a bit more comfortable in my sound, I began to learn a few Spanish covers, and then the songwriting came a bit more naturally after that.  My songwriting approach tends to be that I start with a line or an idea for a song, and build the lyrics around that. Then when I’m happy with the basic elements of the song, I’ll start adding in some chords.

The biggest amount of research involved was probably when it came down to recording the track. I wanted it to nod at the Spanish music I love, and I did a lot of research into what instruments and elements might be needed to do so. I watched a few great videos on how to record flamenco music, and listened to a tonne of Spanish music to make a few reference track playlists to send to my producer, Alex Isla, and guitarist, Jason Elvin. Both of them did such a great job in capturing the sort of sound I wanted to create.

YOU PLAYED IN SOME GREAT FESTIVALS IN THE UK INCLUDING GLASTONBURY AND 2000TREES. HOW WAS YOUR EXPERIENCE WITH THEM AND THE FESTIVAL YOU PERSONALLY ENJOYED THE MOST?

I absolutely love festival season. I think I caught the festival bug at a very young age, and it quickly became a dream of mine to play at one. I was very fortunate to get a couple of opportunities though my university BIMM Brighton, and inspired me to get in touch with a few more festivals myself. Glastonbury will forever be one of my fondest memories, I’d never been before playing there and it was such a magical weekend. Another highlight has to be playing at Shambalas Treehouse stage, it was just such a beautiful setting.

WHAT MADE YOU DECIDE TO DIVE INTO THE SPANISH FOLK GENRE AND BLEND IT WITH YOUR STYLE, AND HOW DO YOU THINK WILL BE THE RESPONSE IN THE UK?

Honestly, it just came about quite naturally. I’ve spoken Spanish since I was tiny, and have always loved listening Spanish music so it was something I was really keen to explore. So once I gained a bit more confidence in my writing I attempted putting bits of Spanish in where I felt it suited. I’m not entirely sure how it’ll be received by people in the UK. But I sent the track out to a few people before it’s official release to test the waters, and the response has been really lovely so far!

WHEN DID YOU FIRST START PLAYING GUITAR AND WHAT INSPIRED YOU TO BECOME A SINGER-SONGWRITER?

I used to have classical guitar lessons when I was in primary school, but dropped it for a good few years after not wanting to do the grades. I’ve been very fortunate in that my mum’s best friend is a guitar teacher, and she helped me get back into it once I decided to try and learn again. Wanting to start learning again very much came from me wanting to start gigging. At the time I was a much stronger player on piano, but quickly realised a keyboard is not the easiest thing to carry about to gigs.

My songwriting started whilst I was having singing lessons at BRIT School with the lovely Sam Marlow. I’d gone to the school to do a course in Technical Theatre, but wanted to have singing lessons on the side. Little did I know it would end up taking over my whole life. Sam was great, because on our first lesson together he asked if I had ever written a song before, and at the time I had written one (rather awful) song, to which he responded “If you can write one song, you can write more” and encouraged me to try and write something every day. And that was it really, I fell in love with songwriting, and it quickly became a way for me to process and communicate the things going on in my head.

YOU LIVE  IN BRIGHTON AT THE MOMENT, HOW’S THE MUSIC SCENE IN THE CITY, AND HOW DOES BRIGHTON INSPIRES YOUR MUSIC?

I’ve been in Brighton for about 7 years now, which feels slightly mad to me! When I first moved down I had very little experience studying music, and when I joined the course at BIMM Brighton it gave me so many great opportunities to work with other musicians and develop my sound. Brighton is full of musicians from all different genres, which I love because I feel like I’ve learnt a lot from watching others play. As the place is so musical, there are so many opportunities to gig and generally just jam with other artists. Obviously Covid-19 threw a bit of a spanner in the works of the live music scene down here, but it’s so nice to see Brighton musicians taking to the stages and streets again recently.

My plans for 2021 are to basically knuckle down and get the rest of the EP recorded and released, if I can. The plan is to stick with the Spanish theme, and release a collection of bilingual songs, along with a Spanish lullaby that my mum used to sing to me as a child. I also plan to record a little video for Momentos Asi fairly soon, so that should be out in the near future too!

Thanks so much for having me! If anyone fancies checking out the track it would mean the world.