Interview with Mountains of the Moon

The band’s new EP ‘The Purl’ is out now

I am really happy to share this interview I had with Adam from the Swedish Folk band Mountains Of The Moon, where he shared his musical background, his experience in Tanzania, and the inspiration behind his music.

At the beginning of this year you released “The Purl”, tell us more about this record and your story up until now.

The Purl is the second in a series of EP:s we’re releasing. I like to think of them as different chapters of an album, drip fed over the span of a year or so. If the first chapter was centered around a breakup, The Purl is much more of a philosophical “where am I, where am I going?” kind of story. I have this urge to pack my bags and find a life somewhere where toxicity and fear doesn’t occupy the throne. Maybe I should go completely off grid. Maybe that Mars voyage is for me, we’ll see!

Your music has some evident epic tones which is seldom present in modern indie-folk. It’s easy to picture it as a soundtrack on an epic adventurous movie or video game. What inspired this particular kind of composition?

Yes, I’ve always been drawn to the bigger brush strokes when it comes to production and arrangement. For me it makes for a cinematic inner experience that enriches the songs a lot of the time. Like a sprinkle of psychedelics to spice the pot. It’s not getting us on the radio or the big playlists, that’s for sure, but I wouldn’t have it any other way.
Inspiration-wise, some of those neural pathways in my musical brain have been opened by the likes of Ben Howard (especially his later works), Agnes Obel, Ry X, Radiohead and similar contemporary artists that move a lot in those grander sonic spaces.

What are the origins of your name “Mountains of the Moon”?

I was watching a nature documentary, BBC:s Africa I think it was, and as I recall they flew up along a completely dead mountain; no vegetation or animal life at all, but when the camera came over the summit and the other side of the mountain was revealed, David Attenborough in his typical dramatic voice said “…these are the Mountains of the Moon”… It was completely flourishing there. I liked the imagery of that. Even when all you see before you is a desertous uphill climb, there can be unparalleled force of life ahead if you can just turn the corner.

What is the relationship you have with nature and how does it inspire you musically?

I’m not going to lie here, I’m more of a distant admirer than someone who actually goes out and puts up a tent in the wilderness. Though in the same way some musicians think of songs in terms of different colours, I’m certainly the type to daydream myself away to some picturesque place in the wild and write my songs in there. The upside is that I can pack up the coulisse in a few seconds and go straight to a warm shower or my local waterhole! 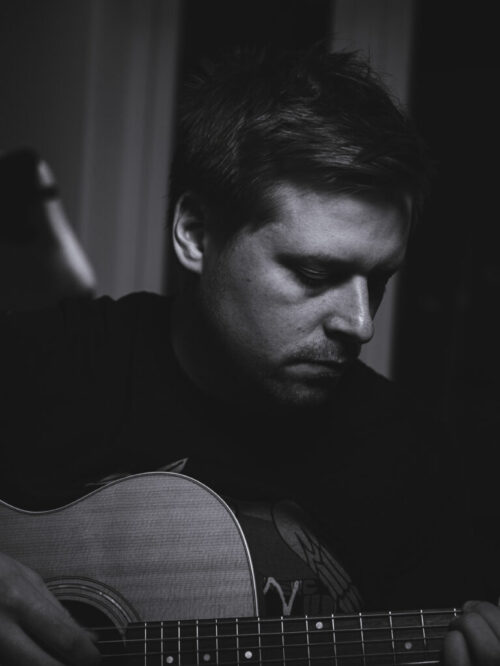 10 years ago you lived for 3 months in Tanzania. How was your experience there and what did it leave you at a human and artistic level?

I was at a point where I needed to throw myself out of my comfort zone, so I think I found just about the farthest point from that zone by going alone to rural Tanzania to stay in a village with no running water or electricity, and a LOT of spiders… I think I grew up more in those three months than my 21 years in Sweden before that. What affected me most of all was meeting kids who had lost both parents to aids, yet were happier with their lot and appreciated every day much more than me and most people I knew back home. There was a big lesson to be learned there, which I believe shaped me substantially from that point on. I realize it comes across as quite pompous, but true nevertheless.
On an artistic level, that’s actually where I first learned guitar. I used to borrow a guitar from some friends there, and hassle my cousin back home to send me instructions on how to play different chords via text message. Good times. But also bad times, especially that time a huge and dangerous snake decided to occupy the doorway out from the house we stayed in.

How do you find the actual folk scene in Sweden and how do you think your band differs from other Sweden acts?

For such a relatively small country, we have some amazing folk artists here. José González is one of my biggest idols, The Tallest Man on Earth is fantastic, Daniel Norgren is great too… I’m sure I forget a few now. They all sound vastly different to each other, and I think we do too. We’re not in their league at all of course, I think hardly anyone here has even heard of us, haha.

What do you have in store for your fans for this year?

If everything goes to plan, the last two chapters of this ‘album’ should be coming out in a future not too far away… The next chapter is certainly the most optimistic set of songs we’ve managed to gather up. The introspective, dark ‘sit in a corner of a room and ponder’ songs will have to sit on the bench for a little while. 🙂

Watch “Free Solo” and “My Octopus Teacher” if you haven’t!