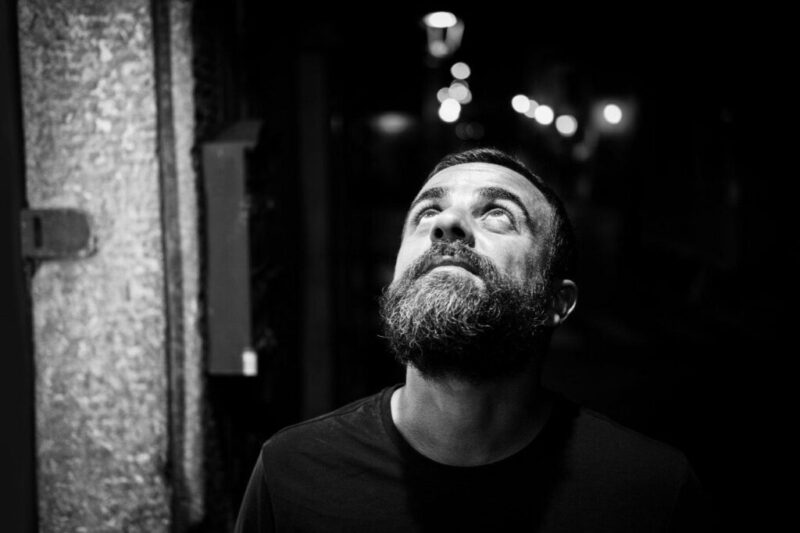 Moscato is an Italian indie folk artist with years of experience in the music industry. We talked about his upcoming album “The Path of Least Resistance” and his peculiar approach to music.

The peculiarity of your current music is that it has no particular language, what inspired you to approach music this way and what led you to this decision?

The process that led me to the use of voice with phonemes didn’t start from a consideration on words and the destruction of their meaning, it was rather a natural process aimed at enhancing the music, the melody, putting all the possible instruments at the service of the notes.
Phonemes are vowels with specific colors and consonants with specific rhythmic potential – using them gave me the opportunity to highlight the melody through voice and to find in this approach a great freedom of expression not bound in any way to an explicit meaning,  allowing me to create  a space in which every listener could let himself be inspired by creating his own world made of images, memories, dreams, freely inspired by the song.

Tell us about your release “Lively SIlence”, why does this have actual lyrics while the other tunes are based on phonemes?

“Lively” is the only track in the album written prior to the composition of the others, but which is well suited to the acoustic/electronic mix that distinguished the record.
I decided to insert it not only because it was musically consistent with the sound concept of the project, but because it speaks of living silence, of that state beyond the mind that allows us to grasp reality for what it is, or at least to intuit it, it’s the same silence from which “The Path Of Least Resistance” was born.

You have a new single called ”Ten people town” that is already available for download before its official release. What’s the meaning behind the name and what inspired the song?

“Ten people town” is the name of the studio where the guitars, pianos and voices were recorded, it is one of the key places that inspired “The path “.  A few years ago Piergiorgio Faraglia – founder of Ten People – passed away, and his legacy did not only have to do with rocks and wood but also with the transformation he left in so many musicians.  He was a turning point for me and for many others, he was able to make you confront your fears by leading you to abandon doubts and thoughts to open yourself to your music, accepting it fully and without reservations.  The song is dedicated to him, to the studio, and to the surrender that leads to what we feel and express in music.

The music video for your song “Ljomi” instead, takes the audience on an emotional journey that shows human strength and vulnerability. What’s the inspiration behind it?

“Ljomi” is a song that evokes wide spaces, it was written after a walk at dawn in the fog, a magical condition in which everything seemed to vanish and the boundary between oneself and the environment fades away at every step.  To make the most of this sensation of space, I tried to lead people through what apparently seemed to be a small detail but which instead conveyed an immense world, people’s gazes.  Those gazes revealed immense inner spaces, making the sound narrative both intimate and boundless at the same time.

“The Path of Least Resistance” is the name of the album you’re going to release later this year, what is the concept behind it and what we can expect from it?

The album was inspired by the places I have visited in recent years in different parts of the world, and by situations and experiences that have struck me, it’s a narration of sensations and awareness that I wanted to translate with rhythms and sounds without imprisoning them in lyrics which would have reduced their meaning to a single point of view.
“The Path Of Least Resistance” was a turning point for me as a musician, I arranged every instrument and took part in every step of the making process, and I hope anyone who listens to it understands the intensity with which I wrote and created it, returning part of the wonder that prompted me to write it.
I also must mention Erica Noventa, who participated with me in the making of the album and which has been a fundamental part of this process.

Which music artists would you like to tour with?

If I may dream, I would like to share the stage with artists such as Bon Iver, Balmorhea and Olafur Arnalds – musicians capable of mixing sounds with incredible alchemy and of great impact, I admire both their work in the studio and their live performances.

The complex moment we are living in has kept us physically distant, but it has brought us closer through the network – I would like this connection to turn into an opportunity to play with musicians from all over the world and in front of different audiences.