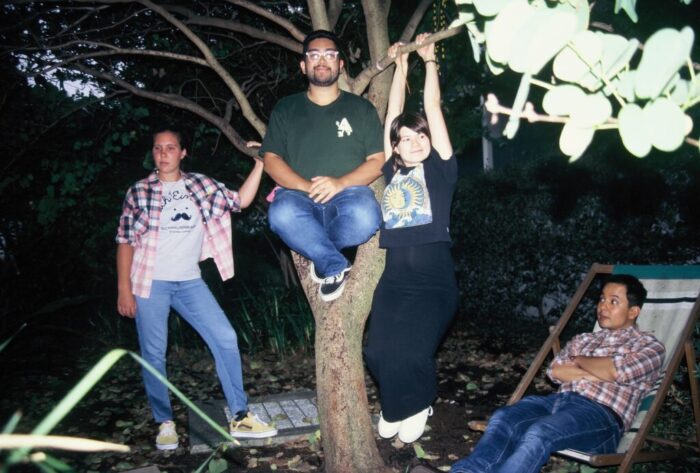 Grids & Dots is an indie band based in Australia. They recently released their EP ‘What Happens to Friendships’ together with some great music video. I definitely had a good time chatting with him and diving into their backgrounds.

HI GUYS, CONGRATULATION ON YOUR EP ‘WHAT HAPPENS TO FRIENDSHIPS’. WHAT’S YOUR STORY UP UNTIL THIS RELEASE?

Hi there! Grids & Dots first started in an apartment in Pyrmont, Sydney with Dan (myself) on guitar and Carmen on synth. I had written a handful of songs and was looking for people to play them with. Carmen eventually switched to guitar and started writing some songs of her own to add to the set and we went through a number of other band mates before finally finding Pat, our drummer, and Saskia on bass.

We released one song with our old synth player / drummer, who also produced the track for us, before moving on and trying to find more permanent members / collaborators.

Some of the songs we recorded for the EP were written way back when the band first started so we were keen to finally record them properly. We’re continually writing new songs and refining our sound and trying to push the boundaries of what we can do sonically.

WHICH IS THE SONG FROM THE EP THAT BETTER DESCRIBES YOUR SOUND AND THE ONE THAT WAS MORE CHALLENGING TO PRODUCE?

The Great Divide has been our most popular song so far and it’s probably a song which sums up the band pretty well. It has a simple melodic hook, lyrics about some kind of melancholy, detuned guitars and an uptempo groove. The same song was probably the most challenging to put together because we hadn’t really rehearsed it much before we went in to record it and so the structure and lyrics were still floating kinda loose at the time, whereas the other songs had been played and rehearsed many times. Everyone in the band contributed to how that song was presented which made it fun and kinda stressful at the same time.

IN THE MUSIC VIDEO OF GREAT DIVIDE YOU WEAR SOME HEAVY COATS AND YOU’RE GOING AROUND WITH UMBRELLAS IN THE DESERT, WHAT WAS THE INSPIRATION BEHIND THE MUSIC VIDEO IN GENERAL, AND WAS IT HOT IN THERE?

It wasn’t too hot in the coats, they’re actually all raincoats and it was rainy season in Sydney at the time. The sand dunes may have looked dry and hot but it was actually quite cool. On one of the last days of shooting, it stormed so badly that we could barely keep our umbrellas from flying out of our hands.

We actually just wore the raincoats because we thought it would be raining all week and we wanted to match outfits! Our director of the video did have a genius and elaborate story for the music video which included time travel, computer hacking and virtual reality and that was the original idea behind it, but we realised it was way too much footage to fit into 3 minutes and we cut it to what you see there! We’re looking forward to him releasing the directors cut one day and it will probably be a feature length film!

HOW DO FIND THE INDIE MUSIC SCENE IN AUSTRALIA AND HOW DO YOU THINK YOUR BAND FITS IN THIS?

The indie rock scene in Australia has always been strong but it is hard to make a name for yourself overseas in other western countries when you’re an Australian band as we are quite far from mainland Europe or North America. The local scene always has some amazing bands that might never get heard outside of our shores unfortunately.

I do feel like we’re a little bit different to a lot of the local rock acts going on here right now, so sometimes I wonder how well we do fit in and whether our real audience is overseas somewhere.

WHICH GENRES AND ARTISTS INSPIRED YOU THE MOST DURING THE RECORDING PROCESS OF YOUR EP?

Umm at the recording process of the EP we were crazy about Land of Talks album ‘Life after youth’ and I also remember listening to the Fazerdaze debut album quite a bit around that time. Slowdive and Ride are two bands that will probably always be there as bands that inspired us to start this band in the first place. So probably a lot of dream pop or shoegaze is how I would describe the genre.

Having said that, we were also heavily listening to electronic and instrumental artists like John Hopkins, Olafur Arnaulds and Nils Frahm more than anything during that time period so I don’t know how that fits into what we do!

LYRICALLY SPEAKING, YOU SEEM YOU ALWAYS HAVE A CHILL APPROACH TO YOUR WRITING, WHAT DO YOU THINK INFLUENCES THIS AND WHAT EMOTIONS DO YOU TRY TO CONVEY?

I’m influenced by so many great songwriters like Nick Drake, Paul Westerberg, Bob Dylan, countless ‘hearts on sleeves’ indie rock bands and I was also a big reader of Russian and American literature, as well as Japanese poetry, when I was a bit younger. I think I am trying to just give glimpses into what my life sounds like in my lyrics. Often melancholic, but pretty exciting, a bit dreamy. I try to just capture 10 second snippets of particular moments of life into a song rather than tell a whole story.

A lot of fans listen to our catchier radio singles and what not, but I really like and hope people listen to the slower songs on the EP as well. ‘Suzy Says’ and ‘What happens to friendships in winter?’ are two songs we’re really proud the way they turned out. Other than that, thank you so much for having us!