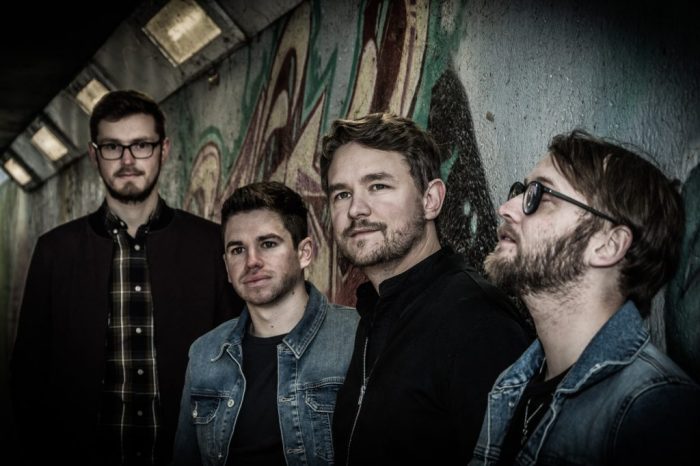 Chasing Shadows is an indie rock band from Rhyl, UK. Influenced by bands like Stereophonics, Foo Fighters, Green Day and Deaf Havana, they are definitely a breath of fresh air in the indie rock scene.

HELLO GUYS, CONGRATS ON YOUR NEW SINGLE ”BULLET”, TELL US MORE ABOUT THIS SONG AND YOUR STORY SO FAR.

Hello! Thank you! This song was a long time coming, as we’d started working on new music just before the first lockdown happened. We finally got back to practice in May and when we finally got to carry on working on it, it all fell into place pretty quickly. We were lucky enough to be awarded a grant by BBC Wales Horizons Launchpad fund to get our new EP recorded and we were extremely grateful for that. We’ve recorded two more tracks and hoping to get back there early next year to do another few to finish off the EP. We’re back gigging and it’s ace, particularly as there’s some songs we recorded that we’d never had the chance to play live.

Before the lockdowns and all that, we’d been been busy releasing and recording music since we got together in 2015. We’d played some excellent gigs too, and travelled around quite a bit. We’re really proud of what we’d released and we’ve had an excellent response to our music so far, and we really want to keep that going!

EARLIER THIS YEAR YOU ALSO PUT OUT A WHOLE EP CALLED “RUNAWAYS”. WHAT’S THE STORY BEHIND THIS RELEASE?

Runaways was a collection of songs that came off the back of our third EP, Darker Days. We’d planned to release this a lot earlier, however (and I don’t want to keep banging on about the pandemic!) but there was a pandemic that happened that sort of put everything on hold. The EP’s title track, Runaways, was written to try and tell a story of two people stuck in a dead-end town, and trying their hardest to get out of it but only seeing one way out, and it not being a good one. We’d recorded this one nearly 18 months before the release, and had plans for the release that we couldn’t do, but we dropped it in March (I think!) this year, and it went down well. The other tracks on this EP tell a few more stories of the ups and downs of relationships, from falling for someone, wanting to spend your time with them, and what happens when it goes a bit wrong.

HOW DID YOU COME UP WITH THE BAND NAME ”CHASING SHADOWS” AND HOW DID THE BAND FORM?

Now, I’d love to come up with an exciting, wonderful story for this, but here we go. We’d try to think of a band name for ages, and we went through possible every combination of words that exist. Nothing seemed to fit, so one evening when Sam was watching Coronation Street, an advert came on for the series ‘Chasing Shadows’, and we thought yeah, that’s good, so we went with that. Such an exciting story!

WHAT ARE THE BANDS AND ARTISTS THAT INSPIRED YOUR MUSIC PROJECT AND SOUND THE MOST?

We’re inspired by all of the music we listen to, and all four of us have different music tastes that we put into our music. We’re inspired by Stereophonics, Foo Fighters, Green Day and Deaf Havana, amongst others.

USUALLY, WHAT ARE THE THINGS THAT INSPIRE YOUR MUSIC LYRICS AND WHAT MESSAGES DO YOU TRY TO CONVEY?

HOW DO YOU FIND THE MUSIC SCENE IN THE UK, AND AT WHAT MUSIC FESTIVAL WOULD YOU LOVE TO PLAY NEXT SUMMER?

It’s great! There’s so many incredible venues that we’ve both played at and want to play at, and on our travels we’ve made some excellent friends and met and played with some brilliant bands. We’re just back from playing FOCUS Wales, where we had the chance to watch loads of bands over the course of a few days. These local venues need everyone’s support though, so go and show them some love!

I think everyone would give anything to play at Glastonbury, wouldn’t they! So that would definitely be one festival we’d love to play at, though we’d also love to play at GreenMan in Wales, Reading/Leeds festival… I think it’s safe to say we’d happily play at any!

For us, it’s more gigs, more writing and more gigs! We’ve got another track we’re excited to release in the next few months, plenty of gigs and making the most of being able to be out there playing our music again!

Thanks so much for letting us chat with you! Thanks to everyone for reading this so far too – we really appreciate it! We’re so grateful to everyone for their support too, for checking out our music – we’ve got more to come, so keep your eyes peeled!