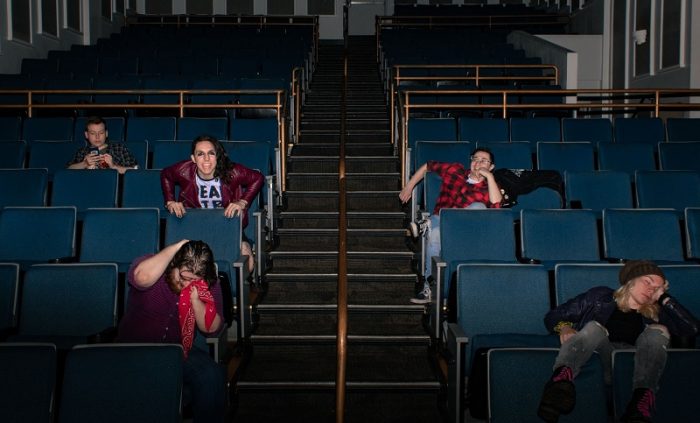 Bullpup’s new single ‘‘Thoughts and Prayers’’ is out now

Bullpup is a band from Massachusetts. I talk with them about their last politically charged tune, the positive message they want to convey with their music as well as their inspiration from the emo-scene era. They’re soon going to release a full LP.

HELLO GUYS. RECENTLY YOU RELEASED A NEW SINGLE CALLED ‘THOUGHTS AND PRAYERS’, TELL US MORE ABOUT THIS RELEASE AND YOUR STORY SO FAR.

Thoughts And Prayers was the first song we wrote after deciding to move in a more politically charged direction lyrically. Activism has always been a huge part of our mission statement but we thought it was about time our art reflected it. We tried to draw parallels between the political climate and climate change using some wordplay to show how both are becoming untenable.

EARLIER THIS YEAR YOU ALSO RELEASED ANOTHER TUNE CALLED ‘ACTOR’, WHAT’S THE STORY BEHIND THIS TUNE?

Actor is a song first written about a really dark time in my life. I was starting a new job which was great but I didn’t feel like I was qualified to be doing it. I felt like I was performing a lot of masculinity in my personal life and I was also struggling with some substance abuse issues and felt like I was performing in my social interactions. Then it became literal with pandemic as I sat down with my piano and just kept practicing in this tiny room hoping that I would be able to get back to playing in front of an audience soon.

YOUR MUSIC SEEMS TO TAKE INSPIRATION FROM MANY DIFFERENT GENRES, HOW WOULD YOU PERSONALLY DESCRIBE YOUR SOUND?

We are musical theater kids through and through. We do our best to marry our love of show tunes and emo to make something theatrical you can rock out to.

YOUR MUSIC SEEMS TO TAKE SOME INSPIRATION FROM THE EMO MUSIC ERA, WHAT ARE YOUR FAVORITE BANDS FROM THAT TIME AND SONGS YOU ARE STILL FIXATED WITH?

The Venetia Fair is and always will be our greatest inspiration. On this single and the record that it comes from we were really inspired by Cursive’s The Ugly Organ and Foxy Shazam as well.

YOUR BAND FORMED IN MASSACHUSETTS, HOW WOULD YOU DESCRIBE THE LOCAL MUSIC SCENE AND HOW DO YOU THINK YOUR BAND FITS IN IT?

We are without a doubt the black sheep of the music scene where we are from. It’s a lot of power pop and indie rock which is wonderful, but we are a little out of place. Luckily for us we’ve made some really great and talented friends who have given us a chance anyways.

WHAT ARE THE MESSAGE AND FEELINGS YOU’D LIKE TO CONVEY TO PEOPLE WITH YOUR MUSIC?

Nobody is as alone as they think. We really want to empower people to make a positive change in their lives and the world around them. If any of our songs help even one person, we can call this band a success.

At the end of September there will be one more single with another music video called Bed Song. Then in October our full length album BE Evil. will release!

We appreciate you giving us your time and eyes, we hope you enjoy what we’ve been working on for you.