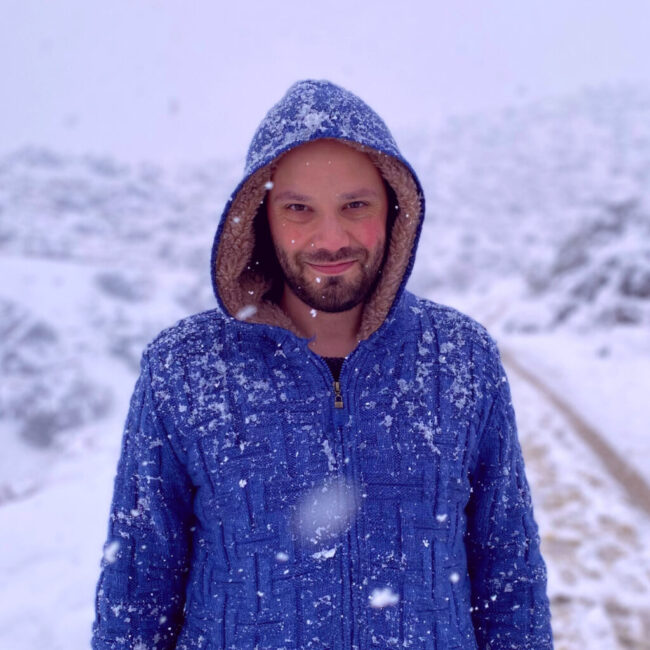 The artist’s new album ‘Platys Yialos’ is out now

I had definitely a great time getting to know better the English folk artist Ali George. He recently moved to Greece and put out an incredible album called “Platys Yialos”. He also embarked on a new mind-blowing project called “80 songs in 80 days”. All details below.

Can you tell us about your journey up until your latest album Platys Yialos?

I started doing home recorded albums when I was around sixteen. I have made six official albums, and lots of EP’s. I spent a lot of time playing gigs around the UK in my twenties and early-thirties. I love the thrill of being onstage, but songwriting is my true calling. A big part of my journey has been finding the right musicians to play with. Most of my albums have quite a “one man band” feel, but this latest one has a band behind it. We spent a couple of years rehearsing the songs for Platys Yialos. It’s certainly the album which has taken the most work so far!

Clearly, Greece was an important influence for Platys Yialos, how did it inspire your songwriting?

My Greek partner and I have been going to the island of Serifos in Greece every summer for four years. For us it is a haven from work and stress. A place to escape to. As a former painter I have a great respect for natural landscape. The views from the island – particularly at dusk – are incredibly inspiring. The island has a sorrowful yet serene atmosphere when the sun is going down, which is indescribably beautiful and incredibly thought-provoking.

What ‘s the song that best describes the album in your opinion and why?

I would say it would have to be “Another Girl”. It’s about falling in love with a side of someone you have never seen before (not about a love affair as the lyrics deceive many into thinking), and that is the crux of what the album is about: exploring new love.

Tell us more about your latest project “80 songs in 80 days”.

I was lying in bed unable to sleep one night recently and the idea just came to me. I wanted to do something epic! I came up with this plan to record video performances of eighty of my songs and release one a day for eighty days. I wanted to try out new versions of songs from my previous albums. I also wanted to bring some of my unrecorded songs out into the world for the first time.

There are songs you played for this project that you probably didn’t play for years. How did it feel to play them again?

It was interesting, occasionally slightly traumatizing (with some of the more personal pieces), but overall, it was nice to revisit them. I also rewrote some lyrics and reworked the guitar parts for some of them, which was great fun!

80 songs are a great music repertoire, what is your creative process, and what helps you keep writing new songs?

Thank you! These days it often takes me a few months to write a song. I tend to write the guitar part (for at least part of the song) before I get started on the lyrics. I usually do several writing sessions a week. For me, the music develops a lot easier than the lyrics. Sometimes I hold on to the guitar part and the vocal melody for a long time before any lyrics come to me. I’ve always had a compulsion to write. I find it very therapeutic. I get incredibly grumpy if I can’t write for whatever reason. The pleasure I get from writing is what keeps me going!

What artists have inspired your sound the most so far?

What new music artists are you into lately?

Recently I’ve been enjoying the albums of Scottish ambient guitarist and songwriter Gareth Dickson. I’ve also been listening to American singer Adam Torres a lot too.

On Instagram, you also played some unreleased tunes, what are your plans for them?

If you would like to order Platys Yialos on CD, it is available for a limited time on Amazon.com. Link below.